Today’s hair transplant options are able to reproduce the natural appearance of hair in men with androgenetic alopecia – hereditary male pattern baldness. But this was not always the case. Indeed, the history of hair transplants go back farther than you might imagine.

If you’re considering hair restoration, take a look at how far the procedure has come since it was first practiced in the German Confederation.

The first recorded hair transplant took place in 1822 in Germany. Professor Dom Unger and his protégé Johann Friedrich Dieffenbach first experimented on animals until, after some success, they used themselves to test the first human hair transplant. Young Dieffenbach removed six hairs from his own head and transplanted them to his arm, where two flourished and grew. In his notes, Dieffenback predicted that their work would quickly make hereditary baldness a thing of the past.

A breakthrough in Japan

Had it not been for the outbreak of World War II, the world might have benefited from the extensive work of Dr. Okuda, a Japanese dermatologist. In his papers, which were written in an old form of Kanji, Dr. Okuda described a procedure which took cylindrical donor samples from a patient’s head and used them correct alopecia in other areas of the scalp, as well as the mustache. Unfortunately, his papers were lost during the war and did not resurface until 2004, reported the International Society of Hair Restoration Surgery (ISHRS).

In the 1950s and 1960s, the medical community conducted significant amounts of research into the causes of male-pattern baldness. Until this time, physicians held many hypotheses regarding the root cause of androgenetic alopecia. It was during the 1960s that researchers determined conclusively that the condition is strictly genetic. At this time, the use of hair transplants began to take off considerably, reported ISHRS. 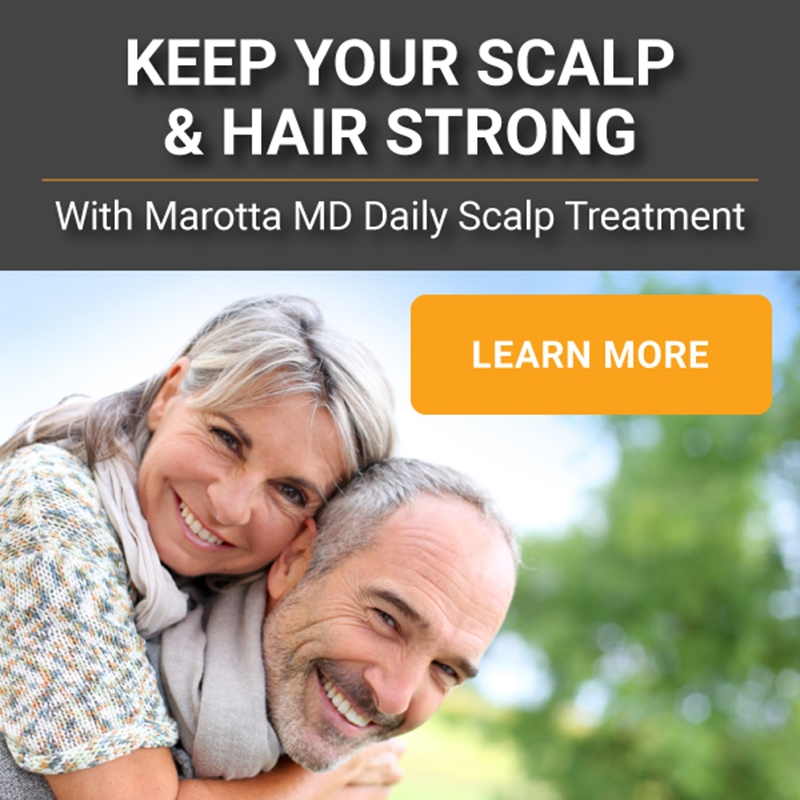 Follicular Unit Extraction is one of the primary hair restoration options used today. Unlike a traditional hair transplant, FUE doesn’t leave a linear scar and typically has a quick recovery time. The donor area of an FUE transplant isn’t limited to the scalp. Rather, follicles may be extracted from anywhere on the body, such as the chest, legs and arms.

Dr. Marotta is a dual board certified facial plastic surgeon. He is committed to delivering the best experience possible to his clients. Schedule a consultation today to see how Dr. Marotta and his team can help you decide which hair restoration option is right for you.

Schedule a consultation!
The first step towards a more confident look is to schedule an appointment. Please contact our office by phone or complete the appointment request form below. Our scheduling coordinator will contact you to confirm your appointment.

Allow me this opportunity to thank you for the wonderful care you and your entire staff provided me. Every aspect of my hair transplant procedure was handled with the utmost professionalism mixed with friendship and kindness. As you may recall, I w…

I cannot say enough about my experience with dr. marotta. Besides being the most kind, caring and professional doctor, my procedure went without a hitch and the results were fantastic. The staff is top notch and the facilties are like being in a five…

You will not be disappointed coming to Marotta Facial Plastic Surgery! Everyone is so wonderful from the front desk to the nurses. I am so happy with my results each and every time I come here.

I had my hair transplants done by Dr. Marotta. The entire staff is highly professional and caring. They spent the time to fully learn my issues and expectations. The office is classy, welcoming and clean. I was very impressed by Dr. Marotta’s educati…

Across the board everything was excellent! From the beginning to the end it was an amazing experience.

Dr. Marotta is a very caring and educated physican. The office staff was always welcoming and willing to help me the whole way thru the procedure.

Dr Marotta and staff are very professional and exhibited tremedous concern for the welfare of the patient. Provided only those services which they felt would be beneficial to my appearance. I have been a patient for many years and highly recommend hi…

Dr. Marotta is one of the most caring and knowledgeable doctors I have ever been to. From the moment I walked in the door I knew I was in great hands. Every member of the staff is incredibly friendly and I was made sure I was comfortable before, duri…